The state of Massachusetts is one of the few states on the forefront of sustainable energy actions.  Today, we know climate change is a very relevant subject among politicians in the federal government, as well as local governments. With the realization that this is a very fast-growing problem, we need to act quickly. 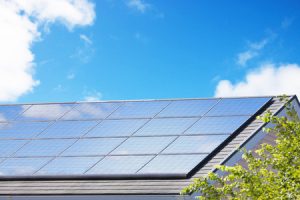 How is Massachusetts Acting?

Massachusetts is taking the initiative to reduce energy dependence on fossil fuels and work towards taking advantage of the economic opportunity for growth in clean energy. In no way can Massachusetts be the only state acting because it is going to take much more to save our environment and health, but we can pave the way for other states to do the same. With the state working with legislation for 100% clean energy goals, it hopes to be on the way towards 80% reduction in emissions by 2050. This clean energy revolution will have a great impact on the country and the world in the near future. Other states have followed suit and more continue to follow.

Massachusetts is the leading state in wind energy across the United States, as well as the first state to formally incorporate energy storage as an active demand reduction measure in its energy efficiency funding program.

Solar energy is decreasing in cost, which is creating a competition increase, even with wind energy. Wind and solar has been a continuing competition factor for natural gas and coal, which has given renewable energy the upper-hand. Solar energy is on the verge of becoming even more of a powerhouse with states across the country acting now with legislation and not hesitating to improve life.

Massachusetts has one of the best solar programs capable of being financed, but regulators at this writing appear to be afraid of success by continuing to constrict solar development with growth control mechanisms. Legislators are calling for 25% of Massachusetts electric consumption to be solar PV by 2030.  The solar industry can meet the challenge, but success requires affirmative action by regulators providing a clear path for solar development through 2030.

Massachusetts being one of the leading states for sustainable energy, we can see the effects it has had on other states across the board. Now, this is all nice to hear, but we don’t have to just rely on our state government to make changes. We, as citizens can be proactive and take initiative in our own lives.

Contact Pope Energy at 855-767-3363 to get more information on our solar development, energy storage, etc.