We are starting to see more and more solar panels on roofs than ever. Homeowners aren’t the only ones taking advantage of the great solar power movement. Big companies and small companies around the country are taking the initiative to help save the environment and save money for their business. 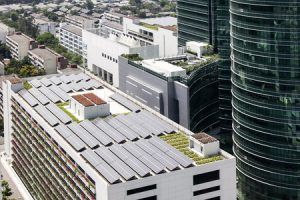 Companies like Google, Amazon, Apple, and many more are embracing solar energy by installing solar panels covering their headquarters’ roofs. These are powering 100% of their buildings. Why is this important? This is important because the competition is noticing and doing the same to help cut costs in their own company. Target is looking to use renewables to store all of their electricity by the year 2030 including installing charging stations for electric vehicles. Apple is at the top of the list powering 100% renewable energy.

As electric vehicles start popping up all over the world with different car companies embracing the movement, Hyundai releases a car with a solar panel roof.

Hyundai – Hyundai is making cars with a solar roof on top powering up to 60% of the power for the car’s battery.

Why is this beneficial?

More and more companies are recognizing that their customers expect their manufacturers and service providers to be sensitive to environmental concerns. The future is in becoming renewable and in so doing, help save the environment. Over 28 percent of total US emissions come from the transportation sector. Car companies are realizing that their customers believe that fossil fuel emissions are killing the environment. It can take years to move towards renewable sources of energy to power our buildings, vehicles and grid. Forward looking companies are investing in renewable sources of energy not only to compete but to thrive in the years ahead. It is great to see big companies like Apple and Google take the lead in investing in solar and other renewables and demanding that their entire supply chain adopt similar renewable energy and lean manufacturing goals. In so doing, they will place themselves well ahead of their less visionary competitors.

Not only does this help companies with their business, but it helps the world eliminate pollution, fossil fuel emissions, and wasteful materials.

At Pope Energy, we provide system owners, landowners, and business with complete development, engineering, procurement, construction and operations and maintenance services for commercial and large-scale solar photovoltaic power projects. Contact Pope Energy at 855-767-3363 to find out more about how we can help you reduce your energy costs and help the environment become greener and more efficient!

It seems like the world is moving in the right direction with renewable green energy, but we still have some conflicts to tackle within governments and politics. Of course, political agendas will play a huge role in this movement due to fixing climate change and environmental problems, as well as election outcomes. Are we still moving in the right direction? Or are we having trouble continuing to move forward?

There is evidence of forward growth in renewable resources and green energy. The United States could potentially have coal-fired power generate only 11% of the United States’ electricity by 2030 according to Moody’s Investors Service. The big issue is that there are many towns and communities across the country in rural America that rely on coal-fired power to run their towns, whether that is the job market or energy. This will be tough to switch over to green energy solutions when these people rely on this industry for work and livelihood.

Trump and the Environment?

The Trump administration has been moving in a different direction with climate issues considering they’re trying to pull the country out of the UN climate summit. But now, apparently Trump is bringing up the environment again. This could be because an election is coming up and voters want to hear about environmental solutions. But this is just politics from either side. We know there are plenty of motives behind politics, and we also know that agendas can be halting the green energy movement.

Companies around the country in different states are expanding their businesses and energy growth to other parts of the country. So, we can see that there is still forward movement just on a more private scale. We expect the government to taking the frontlines, but that’s just not the case. Solar developers are comprised of private investors, utilities and clean energy funds and they are providing the leadership to invest in solar wherever state policy and the economics signal investment.

Other issues that should be an encouragement for a forward progression with green energy for the environment:

This is apparently the most contaminated coal plant in the country affecting rural homeowners especially. Coal plants that rent land from homeowners around the plants can be putting citizens in danger of pollution and contamination of their life and property. These issues are clearly a major problem to citizens around the country. We should be looking at these as motivators to keep moving forward in the green progression, as well as putting them towards the top of the priority list.

There are issues with both sides of the so-called “traditional” energy resources and the green energy movement. The United States hasn’t quite completely solved these issues. It seems though that the country is still moving in the right direction. With states leading the charge in solar energy, wind energy, and off-shore energy now, we see a progressive movement to change the way we acquire our energy. And now, we can see that in some parts of the country, renewable energy is the cheapest source of energy generation even unsubsidized. In Massachusetts, they’re working towards passing bills to promote clean energy and climate adaptation. States like this are working hard to fix the problem with our environment, so that other states can follow suit. It’s a way of letting the federal government know that we need to keep this a priority moving forward in the right direction.

At Pope Energy, we provide system owners, landowners, and business with complete development, engineering, procurement, construction and operations and maintenance services for commercial and large-scale solar photovoltaic power projects. Contact Pope Energy at 855-767-3363 to find out more about how we can help you reduce your energy costs and help the environment become greener and more efficient!